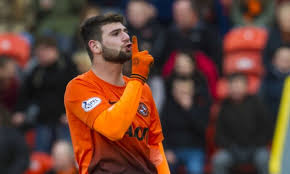 While the likes of Asda and Tesco are big on customer loyalty, I’m not sure Celtic should continue to collect their Dundee United Club Card points by securing the services of Nadir Ciftci.

After snapping up Gary Mackay Steven and Stuart Armstrong from Tannadice not so long ago, Ronny Deila has again turned his head to Tayside, and tested the water with a £900k bid for United’s leading forward.

The big Turk found the net 14 times in the league last season, and has been a popular figure at Dundee United since his move to Scotland, which was brokered by Celtic favourite, Pierre Van Hooijdonk in 2013. With a graceful touch and an eye for goal, it’s easy to understand why Ciftci would flag on the Parkhead club’s radar, but many players do, and not all are a natural fit at Celtic.

While acquiring the Scottish Premiership’s 2nd top scorer from last season may sound like a reasonable idea in some respects, I believe the negatives of the move far outweigh the positives, and Celtic should look elsewhere.

First off, by playing at Dundee United, Ciftci is granted a certain attacking freedom that just doesn’t come when you’re a Celtic striker playing in Scotland. He’s spent the last 2 years playing against teams who fancy their chances against Jackie McNamara’s side, and as such, will defend high up the park, leaving space to run into. Celtic strikers are seldom granted the same allowance, as Ronny Deila’s frontmen find themselves breaking down sides playing with five defenders, packed deep into their own penalty area.

Ciftci could potentially have a modicum of success, but is he any better than the current crop of Celtic strikers, all of who are considered ‘not good enough’ by large sections of the support? Is Ciftci more gifted than Anthony Stokes? Or Leigh Griffiths? It’s questionable. Some would even highlight the likes of Teemu Pukki as a comparison, who arrived with over 30 international caps, and a Bundesliga pedigree, only to flop in the East End of Glasgow.

Ciftci’s disciplinary record and inconsistent form are also a cause for concern. A reputation for petulance, as well as an incident where he grabbed a referee by the throat, and also allegedly tried to bite an opposition player, will hang over his football career for the next few seasons at least.

Celtic have probably hit the nail on the head with their initial bid of £900k in terms of establishing the correct value of the player, but the Tayside club rejected this offer. Should Celtic wish to acquire the player, they’ll need to go well over the £1m mark. The issue is complicated further, as Middlesborough have expressed an interest in the player. Is it wise to get involved in a bidding war with a club who’ll be pushing for promotion to the English Premiership this season? A £3m flop at Middlesborough would soon be forgotten about, but a £3m flop at Celtic would live long in the memory of the fans, and would seriously dent the club’s transfer budget.

The move would also be bad for the neutral fan in Scotland too. The Scottish domestic league is enough of a foregone conclusion as it is, without stripping Dundee United of their one remaining flair player. With no Rangers in the league again this year, Celtic will cruise to the title. Aberdeen can’t be expected to replicate the heroics of last season again this year, and if Celtic snap up Ciftci, Dundee United will have lost their top three players, all to the Parkhead club, in less than a year.

Ronny Delia’s task is not easy. He must continue to entertain the fans, develop players, balance the books, and give a decent showing in Europe, all on a shoe string budget. Although Celtic cannot afford to throw £10m+ to obtain what the media would call a ‘Champions League striker’, they can look to develop younger players to reach that level.

Few people would argue that Ciftci has the potential to be a ‘Champions League striker’, so Deila must resist the pressure to make snap judgements in the transfer market, and patiently wait for the right player to emerge amid the furore of the transfer window.

One Reply to “Why Ciftci is the wrong bhoy for Deila”