Did an early exit from the Old Firm goldfish bowl help his development? 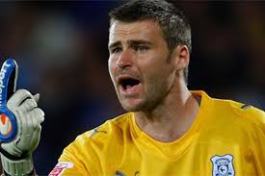 Result apart, there were few positives to be taken from Scotland’s 1-0 away win against Norway earlier this week, but few could dispute the plaudits received by David Marshall for his heroics between the sticks.

A string of terrific saves, and an overall competent performance secured a clean sheet for Strachan’s resurgent Scotland side, and has further cemented the general opinion that Marshall has become a top goalkeeper.

It’s a far cry from the shaky teenager that emerged in a Celtic jersey in 2004 in the most bizarre of circumstances in the Nou Camp. That night against Barcelona, presumably running on adrenaline, the young ‘keeper gave the performance of his life, and replicated the feat in the home leg to help Celtic knock-out the Catalan giants.

Things at Celtic quickly went sour for Marshall. Conceding 5 against Artmedia Bratislava, and 4 against Motherwell in quick succession left then Celtic manager, Gordon Strachan, of the opinion that Marshall was surplus to requirements.

How ironic now that Strachan is the man to thrust Marshall back into the limelight on the international scene. Marshall has now secured two consecutive clean sheets for Scotland, and has been at the heart of a robust Cardiff unit in the English Premiership.

The development in the keeper, who’s still just 28, is remarkable by comparison to his Celtic days.

I’m sure many football fans back in 2005 would’ve written Marshall off as a sub-standard keeper, but is that a failing of the pressures attached to being thrown into the Old Firm goldfish bowl at a young age? The pressure to perform without any modicum of weakness or nervousness for Celtic has proven to be the undoing of many players over the years.

When Marshall was cast off to Norwich to carve out a career in England, few expected him to re-emerge as a contender for the Scotland jersey.

Years of developing his game in the English Championship in his early 20’s was arguably the best thing for him. Playing for Norwich, in such a competitive league, where there was no expectation of a clean sheet every week, perhaps allowed Marshall to develop naturally, at his own pace, and fulfil the potential that Celtic identified in him as a lad.

He’s now approaching 150 appearances for Cardiff, through the good times and the bad. He’d never have been allowed that development time at Celtic, so should Celtic be factoring in long term outbound loan deals when developing youngsters? The Marshall case backs this theory, and perhaps there are other examples too.

Charlie Mulgrew’s story echoes this idea. Mulgrew left Celtic as a rough-around the edges 20 year old who wasn’t good enough to hold down a first-team slot. To keep him in the squad for 4/5 years beyond this in the hope that he comes good would be folly, but look at how things have panned out. Mulgrew spent a handful of years playing first team football at Dundee United, Wolves, Southend and Aberdeen, before returning to Celtic as a completely different player.

Just under 5 years of first-team football, cutting his teeth, has helped Mulgrew become an accomplished professional, worthy of being a Celtic and Scotland regular.

There are so many examples of promising young former Old Firm players who disappeared off the radar, that a longer, or more complicated development period is surely something worth considering.

Sometimes throwing a youngster in and expecting a hero to emerge is asking too much, even in the idealistic world of the Old Firm fan. As football grows and develops, we can expect approaches to player development to grow and develop too. Surely it’s worth reviewing this process to maximise the potential of players, both for the good of our game on the domestic, and international front?